Picture a fluffy, adorable kitten with calico markings and bright green eyes: this is Cinnamon. Cinnamon was found outside, hungry and alone when she was about three months old. Her rescuer, luckily, had a co-worker who couldn’t resist an impossibly cute (and free) ball of fur, and Cinnamon began a new life as an outdoor pet… spending a few minutes each day with her family, but mostly roaming the neighborhood as she pleased.

When she was six months old, Cinnamon got pregnant. Sixty days later, she gave birth to six kittens under a deck a few houses down from her home.  She devoted herself to the newborns, and spent most of her time feeding and caring for her litter.  But one morning, while she was away finding food for herself, a hungry fox carried off 2 of the tiny two-week-old kittens. Cinnamon soldiered on, caring for the survivors until they were able to explore beyond the yard they were born, and eat on their own (thanks to food the neighbors left out for them). At that point Cinnamon patted herself on the back for a job well done, and went back to her regular life.

At seven weeks old, one of Cinnamon’s kittens walked out into the street as a car zoomed by…  and didn’t survive the encounter. The other three young kittens eked out their existence, surviving mostly on the charity of neighbors who fed them, and staying one step ahead of the neighborhood dogs, wildcats, and ever-present cars. One got lucky and was taken in as a little girl’s pet, but the other two grew up to be  “community cats,” with no one looking out for them.

At six months old, Cinnamon’s female kitten got pregnant; 60 days later, she had a litter of four.  A neighbor discovered them and swept the babies off to an animal shelter for adoption, but since the rescuer couldn’t catch the mama cat, Cinnamon’s daughter stayed out in the field on her own.  She went on to have three more litters in the next two years–giving Cinnamon seven more female grandkittens–before she, too, was hit by a car.  All seven of these female grandkittens survived long enough to have multiple litters of their own. Most of the female kittens from those litters did, too, and so on… over and over with each generation.

In three years, Cinnamon and her descendants produced hundreds of unplanned kittens… all with uncertain futures. Though a few lucky ones were adopted by kind strangers, most wound up as prey to other animals, roadkill, or casualties of gun owners trying to keep feral cats out of their yards. 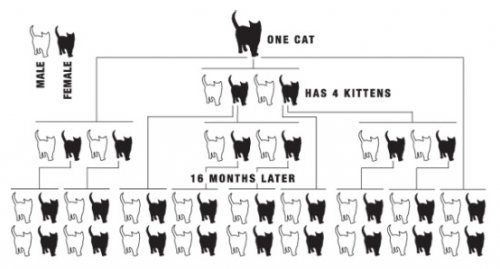 Imagine if we could go back to the beginning of Cinnamon’s story, and have her spayed before she had that first litter under the deck. There would have been no innocent kittens eaten by foxes, mauled by dogs, or flattened by cars. None would have starved, been shot at, or suffered painful deaths from common preventable diseases.  When we say that spay/neuter saves lives, this is what we mean. We prevent suffering and homelessness from happening in the first place.

In 2018, we spayed or neutered more than 4500 animals–less than half the number of kittens Cinnamon and her descendants could have produced in just five years. Imagine the amount of suffering 4500 un-spayed Cinnamons would have brought into the world.

We spend a lot of time, money and resources on “rescuing” animals from shelters and homelessness, because it’s wonderful to reduce the suffering of an animal… but rescuing only saves one animal at a time.

Spaying one, saves thousands. And the more resources we can devote to spay/neuter programs, the fewer the number of animals that need rescuing.

Supporting Napa Humane’s low-cost spay/neuter programs is the single most impactful thing you can do to save lives and reduce animal suffering in our community. I hope you’ll consider making a donation. 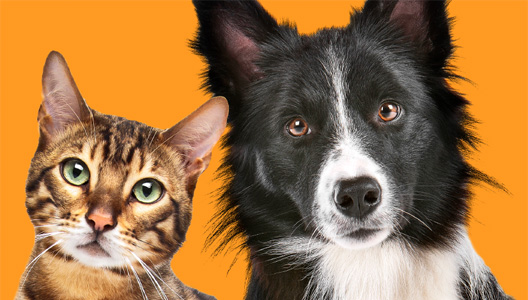